Nigel Godrich
In Rainbows is the seventh studio album by English rock band Radiohead. It was first released as a pay-what-you-what download through the band's website on 10 October 2007, followed by a physical release on 3 December 2007 in the United Kingdom by XL Recordings and on 1 January 2008 in the United States by TBD Records. It was Radiohead's first release after their recording contract with EMI ended with their previous album Hail To the Thief (2003).

Radiohead worked on In Rainbows for more than two years, beginning in early 2005. In mid-2006, after their initial recording sessions with new producer Spike Stent proved fruitless, the band toured Europe and North America performing future In Rainbows material before re-enlisting longtime co-producer Nigel Godrich. Radiohead incorporated a variety of instruments, using electronic instruments, string arrangements, piano, and the ondes Martenot. The album has been described as being more personal than the band's previous albums, with lead singer and songwriter Thom Yorke describing most of its music as his versions of "seduction songs".

In Rainbows' pay-what-you-want release, the first to be authorized by a major act, made headlines around the world and sparked debate about implications for the commercial music industry. Nonetheless, the physical release of the album debuted at number 1 on the UK Albums Chart and the US Billboard 200, and had sold over 3 million copies worldwide by October 2008. The album received universal acclaim from critics, and appeared on lists of the best albums of 2007 and of the 2000s by various publications. It won two Grammy Awards for Best Alternative Music Album and Best Boxed or Special Limited Edition Package. In 2012, Rolling Stone placed In Rainbows at number 336 on its updated list of "The 500 Greatest Albums of All Time".

In 2004, after finishing the world tour in support of their sixth album Hail To the Thief (2003), Radiohead went on hiatus. As Hail To the Thief was the last album released on Radiohead's six-album contract with Parlophone, the band had no contractual obligation to release new material. Drummer Phil Selway said:

"It was definitely time to take a break. There was still a desire amongst us to make music, but also a realisation that other aspects of our lives were being neglected. And we’d come to the end of our contract, which gives you a natural point to look back over at what you've achieved as a band."

Singer and songwriter Thom Yorke worked on his first solo album The Eraser (2006), and multi-instrumentalist Jonny Greenwood worked on soundtracks for the films Bodysong (2004) and There Will Be Blood (2007).

In March 2005, Radiohead entered their Oxfordshire studio and began writing and recording new music. In an effort to "get out of the comfort zone", they decided against involving producer Nigel Godrich, with whom they had recorded five albums. Regular recording sessions began in August 2005, with the band updating fans on their progress intermittently on their new blog, Dead Air Space. The sessions were slow, and the band struggled to regain confidence; according to Yorke, "we spent a long time in the studio just not going anywhere, wasting our time, and that was really, really frustrating." Guitarist Ed O'Brien said the band considered splitting up, but kept working "because when you got beyond all the shit and the bollocks, the core of these songs were really good." They attributed their slow progress to a lack of momentum after their break and the lack of deadline and producer.

Radiohead performing live at the Greek Theatre in Berkeley, California, during their 2006 tour. They band used the tour to test songs later recorded for In Rainbows.

In December 2005, Radiohead asked producer Spike Stent, who had worked with artists including U2 and Björk, to help them work through their material. O'Brien told Mojo: "Spike listened to the stuff we'd been self-producing. These weren't demos, they’d been recorded in proper studios, and he said, 'The sounds aren't good enough." The collaboration with Stent was unsuccessful and ended in April 2006. In an effort to break the deadlock, Radiohead decided to tour for the first time since 2004; according to Yorke:

"We basically had all these half-formed songs, and we just had to get it together. And rather than it being a nightmare, it was really, really good fun, because suddenly everyone is being spontaneous and no one's self-conscious because you're not in the studio ... It felt like being 16 again."

In May and June 2006, Radiohead toured major cities in Europe and North America and returned to Europe for several festivals in August, performing many new songs.

After the tour, Radiohead re-enlisted Godrich, who, according to Yorke, "gave us a walloping kick up the arse". In October 2006, recording started at Tottenham House in Marlborough, Wiltshire, a country house scouted by Godrich where Radiohead worked for three weeks. The band members lived in caravans, as the building was in a state of disrepair; Yorke described it as

"Derelict in the stricter sense of the word, where there's holes in the floor, rain coming through the ceilings, half the window panes missing ... There were places you just basically didn't go. It definitely had an effect. It had some pretty strange vibes."

The sessions were productive, and the band recorded Jigsaw Falling into Place and Bodysnatchers. In October, Yorke wrote on Dead Air Space that Radiohead had "started the record properly now ... starting to get somewhere I think. Finally."

In December 2006, further sessions took place at Halswell House, Taunton and Godrich's Hospital Studios in Covent Garden, where the band recorded Videotape and Nude. In January 2007, Radiohead resumed recording in their Oxfordshire studio and started to post photos, lyrics, videos and samples of new songs on Dead Air Space. In June, having wrapped up recording, Godrich posted clips of songs on Dead Air Space.

Not including Last Flowers, which Yorke recorded in the Eraser sessions, the In Rainbows sessions produced 16 songs. After the 56-minute, 14-track Hail To the Thief, Radiohead wanted their seventh album to be concise; they settled on ten songs, saving a further six tracks (not counting short instrumentals) for the limited edition "discbox" release. The album was mastered by Bob Ludwig in July 2007 at Gateway Mastering, New York City. 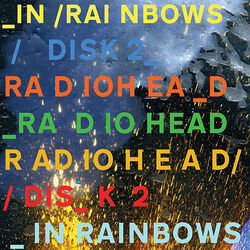