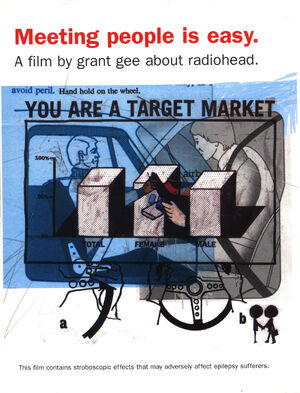 Meeting People is Easy is a 1998 British musical rockumentary film directed by Grant Gee, following Radiohead on their exhaustive world tour in support of their third album OK Computer (1997). The film was released on 30 November 1998 in the United Kingdom, and was nominated for the Grammy Award for Best Long Form Music Video in 2000.

Meeting People is Easy takes place during the promotion of Radiohead's 1997 album OK Computer, containing a collage of video clips, sound bites, and dialogue going behind the scenes with the band on their world tour, showing the eventual burn-out of the group as the world tour progresses. The inaugural show of the OK Computer tour began on 22 May 1997 in Barcelona, Spain. Their final performance, 104 concerts later, was in New York's Radio City Music Hall.

Unlike other music documentaries, the film does not focus on the band's friendship with one another, families, or anything else outside the direct production, promotion and touring of a record. Most of the film contains footage consisting of music writing, concerts, promotional material, and abstract video footage.

During interviews, the rock group take on critics, record label hype and US modern-rock radio, which Yorke compares to "a fridge buzzing". This coincides with the soundtrack of the film, with sounds that weave in and out of snatches of interviews, conversations, and songs. Along with this "radio wave" effect is a series of edits and quickly moving shots with stills, slow tracking shots, time-lapse photography, and colour/black-and-white film and video.

The documentary opens with video taken from the back of a subway train, along with the track Fitter Happier. This cuts to the band members reading off several dozen radio intros. Inter-spliced with the promotional material is live footage taken from various venues around the world, including the song Karma Police on The Late Show with David Letterman.

Included in the documentary are various video clips of television appearances, newspaper articles, and other mentions of Radiohead in the media. In a clip from a Sky News programme, presenter Kay Burley comments on the video for the band's song No Surprises, saying:

"Music to cut your wrists to. [...] It's the most miserable-sounding tune I've ever heard."

While watching the video, the programme's music reviewer quips:

"You'll probably quite enjoy it because he actually drowns at the end."

The making of the video is then shown, where front man Thom Yorke is lip-syncing while trapped in a tank of rising water.

The world tour that is the subject of the film has subsequently been admitted as a low point for the band, specifically Yorke, who had a near-breakdown. As "On Your Own Again" by Scott Walker plays on the soundtrack, Yorke is seen placing a note that reads "I am not here and this is not really happening" on his hotel windowpane, which looks out onto midtown Manhattan. This message was suggested by his friend Michael Stipe (singer of R.E.M.) as a way of dissociating himself from everything around him, and was used as the central lyrics of How To Disappear Completely, released on their following album, Kid A. This would also form the background of Radiohead's recording sessions beginning in 1999 for their next albums Kid A and Amnesiac, inspiring a different songwriting and recording style and the band's changed sound after OK Computer.

The film was nominated for the "Best Long Form Music Video" category in 2000.

In an interview, director Grant Gee explained the production process of filming Meeting People Is Easy. Gee explains that Radiohead

"Sat in these hotel suites for three days, four suites booked up simultaneously"

doing interviews; 20-minute slots for interviews, a 40-minute slot if it was a bigger newspaper or magazine. To film and record every individual interview, Gee was:

"running around, leaving a microphone in one room, going and filming something in another."

In subsequent years EMI and other record labels had released countless DVDs to promote pop and rock acts, as the format has become dominant over VHS in most parts of the world. In 1999, the film became the first DVD ever released by Radiohead's record label EMI/Parlophone/Capitol Records.

Reception for Meeting People Is Easy was very positive. The film received an average rating of 6.5/10 on Rotten Tomatoes, giving it 71% freshness. Reviewer Jessica Brandt of theshrubbery.com gave it 5 out of 5 stars. Film critic Daniel Fletcher named Meeting People is Easy one of his ten favourite films.

Troy Patterson, a critic for Entertainment Weekly, gave the film a B+, calling it:

Bart Blasengame gave the film 4 out of 5 stars, stating:

"Instead of taking the usual tour documentary approach and dwelling on individual concerts or behind-the-scenes banter between the band, Gee's film focuses on the absurdity of being an important rock band in the current musical landscape – the shallow marketing of the band, the endless stream of redundant interviews, the blinding photo shoots and awkward television appearances."

Kevin Archibald of IGN gave the film a rating of 8/10.

The film has sold over half a million copies on DVD/VHS.