Radiohead Knowledge Base
Register
Don't have an account?
Sign In
Advertisement
in: Songs from A Moon Shaped Pool

Song from A Moon Shaped Pool

True Love Waits is the final song from the album A Moon Shaped Pool. A ballad with lyrics about love and abandonment, the song was first performed in 1995; it was performed again several times over the following years, becoming a fan favourite. Radiohead attempted to recorded the song for their albums OK Computer (1997), Kid A (2000) and Amnesiac (2001), but struggled to find an arrangement that satisfied them, and it became one of the band's most famous unreleased songs. A live version of the song, with singer Thom Yorke performing solo on acoustic guitar, was released on the live album I Might Be Wrong: Live Recordings (2001). The track was finally released as the final track on Radiohead's ninth album, A Moon Shaped Pool (2016), as a minimal piano ballad.

Radiohead first performed True Love Waits in December 1995 in Brussels, with Thom Yorke on acoustic guitar accompanied by an "airy" keyboard melody. It was performed again several times in the following years, becoming a fan favourite and one of Radiohead's most famous unreleased songs.

Before its release on A Moon Shaped Pool, Thom Yorke performed True Love Waits on acoustic guitar. Radiohead recorded a version of the song for their third album, OK Computer (1997), but discarded it. They worked on the song again during the joint sessions for Kid A (2000) and Amnesiac (2001). Guitarist Ed O'Brien wrote in his studio diary:

"[It's] been kicking around for about four years now and each time we approached it we seemed to be going down the same old paths. It actually sounds like the start of something exciting now."

One month later, he wrote:

"This is something like approach number 561 but it is a great song. It's simply trying to find a way of doing it which excites us. And we may have found a way, at the very least we've found a new approach … It may of course be utter crap and we have so lost the plot on this song. Please don't let that be the case."

The band failed to find an arrangement that satisfied them, and song remained unreleased. 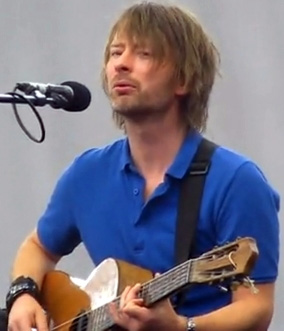 Radiohead performed the song several times during their 2001 Amnesiac tour; a recording is included on the live EP I Might Be Wrong (2001), with Yorke performing solo on acoustic guitar. It was performed a further six times in 2003. From 2006, Yorke began performing a slower version of the song on keyboard as an introduction to performances of Everything In Its Right Place. In 2012, Radiohead producer Nigel Godrich said:

"We tried to record it countless times, but it never worked. The irony is you have that shitty live version [on I Might Be Wrong]. To [Yorke's] credit, he needs to feel a song has validation, that it has a reason to exist as a recording. We could do 'True Love Waits' and make it sound like John Mayer. Nobody wants to do that."

In 2016, True Love Waits was finally released as the last track on Radiohead's ninth album, A Moon Shaped Pool (more than 21 years after its debut) as a minimal piano ballad.